The recent chute-out of JetBlue flight attendant Steven Slater is an example of an “I Quit” moment that became very public and garnered a flood of media attention. The folk hero status of Slater indicates that many people fantasize about dramatic exits from the workplace – but what happens next? Only one guy will create a career out of quitting. Most who walk out need to walk into another job. 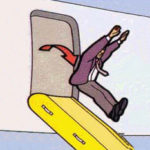 But people don’t necessarily need to be in the media spotlight for a moment like this to impact their career. With the increase of social networking, “I Quit” moments that happen out of the public eye can still become visible to recruiters and potential employers. I posted a question on LinkedIn to see what employers and HR professionals think about the career consequences of a dramatic exit – and heard a wide range of opinions and thoughtful advice.

For some, “I Quit” moments are a promising sign of the right go-getter attitude and strong personality needed for certain industries.

“If the person has the ability to work in an industry where drama and celebrity are seen as pluses, then they can bill the big ‘I Quit!’ moment as showing strength. Some direct sales positions and some entertainment positions would fit that description,” wrote Hugh Rutledge, an editor at Pearson Prentice Hall.

But others aren’t as forgiving of such bold behavior.

“Every employer is looking for the very best candidate for the position. If you’ve got one of these “I quit” episodes in your past, the employer is wondering, “Will I be the next one left high and dry? No way I’d consider this sort of drama, ” wrote Dan Scott of Scott Law Group.

Those straddling the fence say that it depends on the situation. Strong, professional candidates may have had solid grounds for throwing in the towel. In fact, walking out may point to an individual’s clarity of thought and integrity rather than a problem with authority.

“Professionally quitting for valid reasons may be a respectable choice. As far as hiring talent, if the person did it for mature, principle-centered reasons, why hold it against them while giving credit to talent that salutes and doesn’t question ‘questionable’ decisions?” wrote James Roncevich, president and founder of JMR Financial Group Consulting.

But most said to keep the fuss to a minimum. You never know when future opportunities may bring you back to old colleagues, and you don’t want a bad past to catch up with you.

“I have hired someone back into a company that they had walked out of. He was the best person for the job, and a professional about it,” wrote James Bupp, an electrical engineer at Draeger Medical. “If that ‘I Quit’ moment hits, try very hard not to burn any bridges. Do not flame the company or your boss. It could be that a number of years in the future you would like to go back – maybe your boss is no longer there and no one remembers you. But HR will remember you if you (made) too much noise when you left.”

Jennifer Dalitz, shEO with sphinxx, counsels having an exit interview in order to gain some closure and to do some good for your (former) co-workers. “Many employers report having no idea how stressful their company is to work in, or how unsupported or harassed their employees until they quit. You could do your ex-co-workers and future unwitting employees of your old company a world of good.”

With the unemployment rate at a steady 9.5 percent and the number of unemployed individuals at 14.6 million, quitting doesn’t seem the most attractive idea. Although most discussions of unemployment focus on layoffs, voluntary separations (or quits) can also be a measure of the economic climate. The quits rate typically rises when people think they can easily find another job and falls when they believe jobs are scarce.

And with 5 unemployed persons per job opening as of June, the big “I Quit” moment may not leave a person with many options. Social media marketing consultant Christine Hueber was succinct in her advice: “Be going to something else.”