Recruiters have a tough gig. Getting talent in the door — quality, experienced, enthusiastic, talent, no less — is difficult in a competitive, job seeker’s market.

At the end of the day, though, “good” talent is a function of a recruiter’s judgment — what they care about, what they’ve seen, and how their definition of culture evolves over time.

lot of complexity goes into that judgment, between biases implicit and explicit, deal-breakers in an interview, or key traits that have been proven to yield a great worker. Understanding the why behind those judgments is key to evaluating the crucial role recruiters play in hiring.

This report breaks down recruiters’ attitudes, behaviors, fears, strategies, and predictions for how to build the best companies possible — good people, good practices, and good culture. 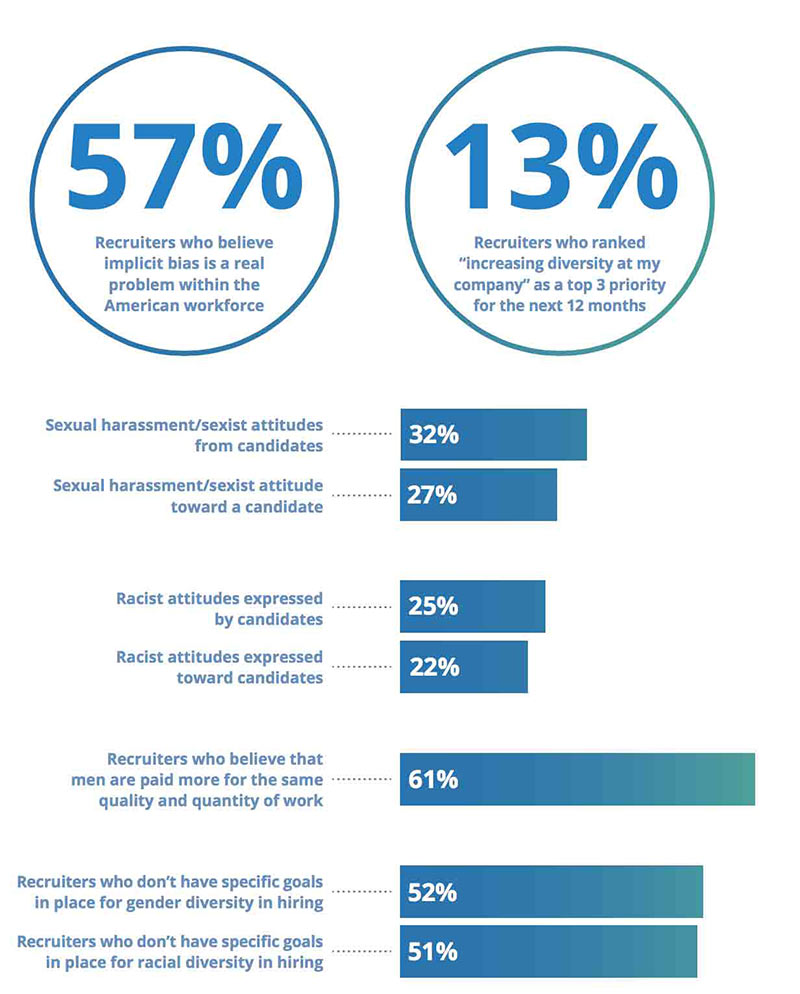 Despite Their Best Efforts, Bias in Hiring Does Exist

A majority of recruiters (57%) believe implicit bias is a real problem within the American workforce.

Some recruiters even see biased attitudes in action:

Despite being aware of bias, most recruiters’ companies are reluctant to make specific goals for gender (52%) and racial (51%) diversity in hiring. And only 13% of recruiters ranked “increasing diversity at my company” as a top three priority for the next 12 months. 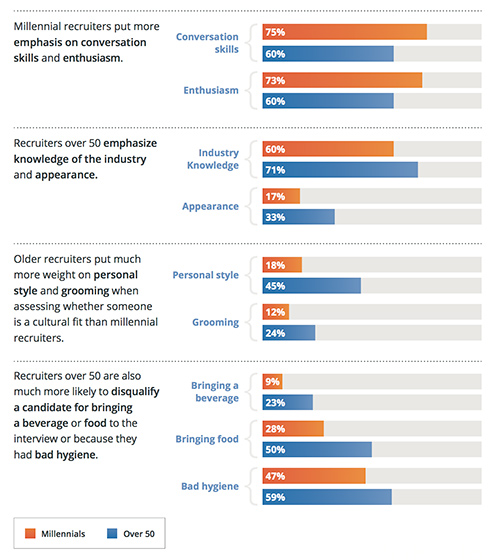 Our Age Impacts How We Hire

When it comes to judging candidates, there are some major differences between millennial recruiters and their counterparts over 50 years old.

What Men & Women Disagree On

When it comes to evaluating talent, men are more visual — while women more often judge on credentials. 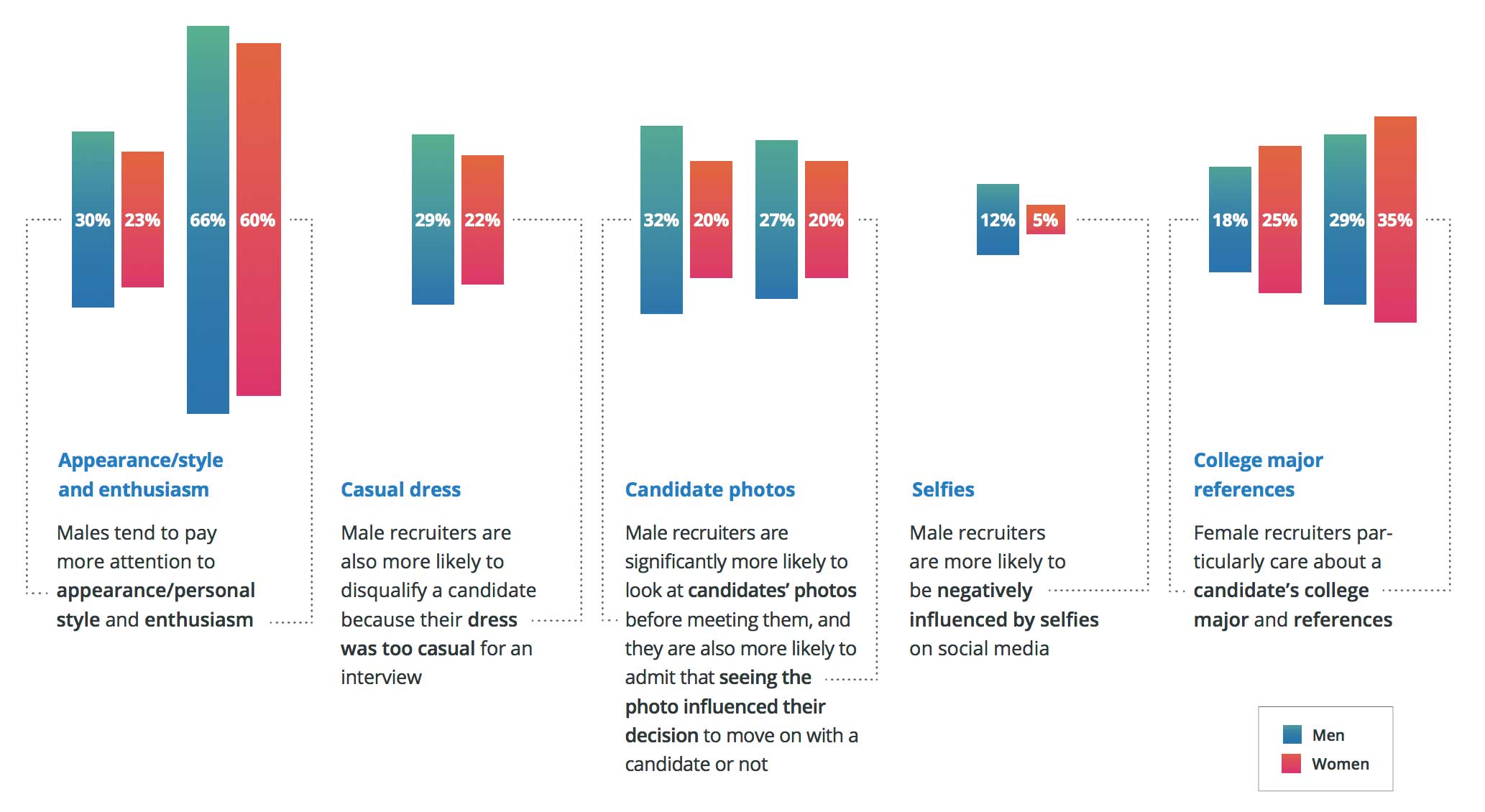 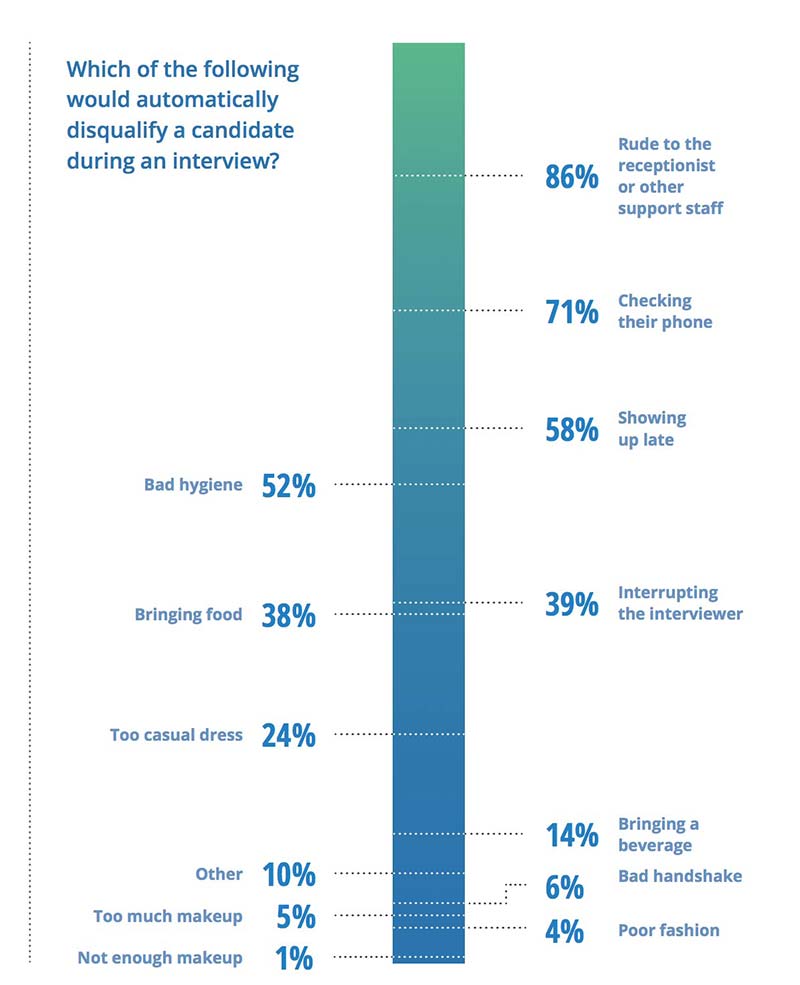 But Some Deal-Breakers are Universal

Sometimes, it only takes one mistake to take a candidate out of the running.

Recruiters Have Witnessed Everything

The good, the bad, and the downright strange 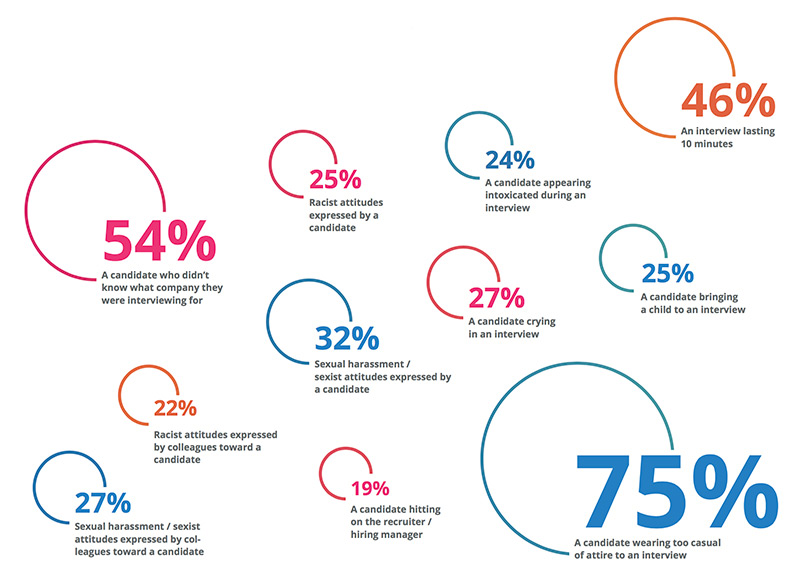 Social Media is a Minefield for Red Flags 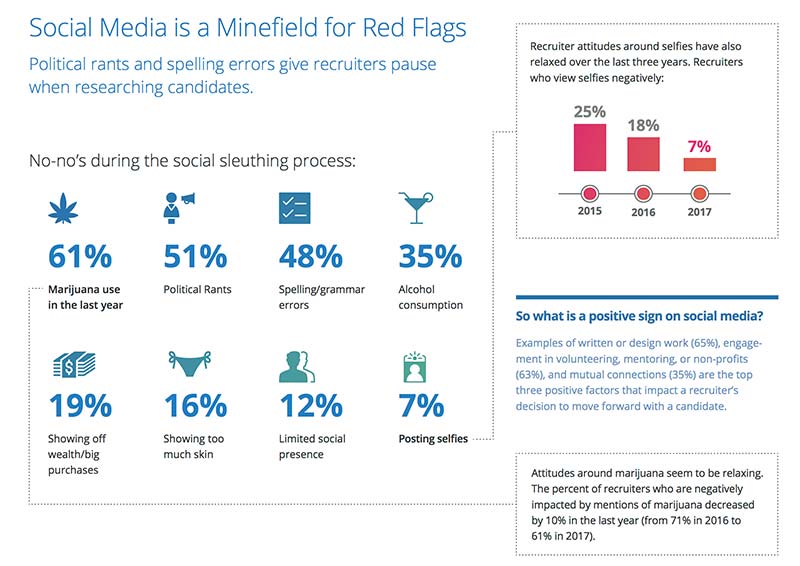 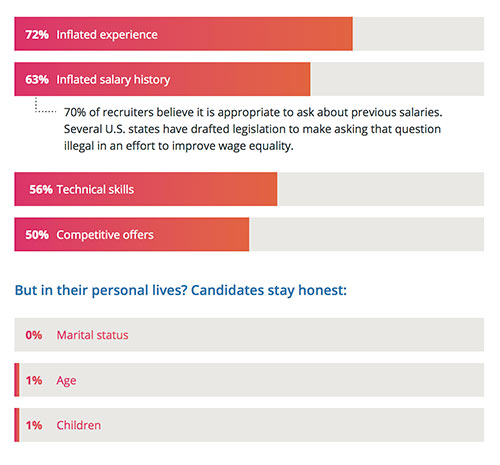 Recruiters Are Wary of Misbehaving Candidates

For those recruiters worried about drug use, rest assured: 44% report that their candidates rarely (less than 25% of the time) fail a drug test.

But 43% don’t screen their candidates for drugs at all.

Recruiters are still reluctant when it comes to hiring candidates with criminal records: 81% of recruiters rarely bring them onto staff. 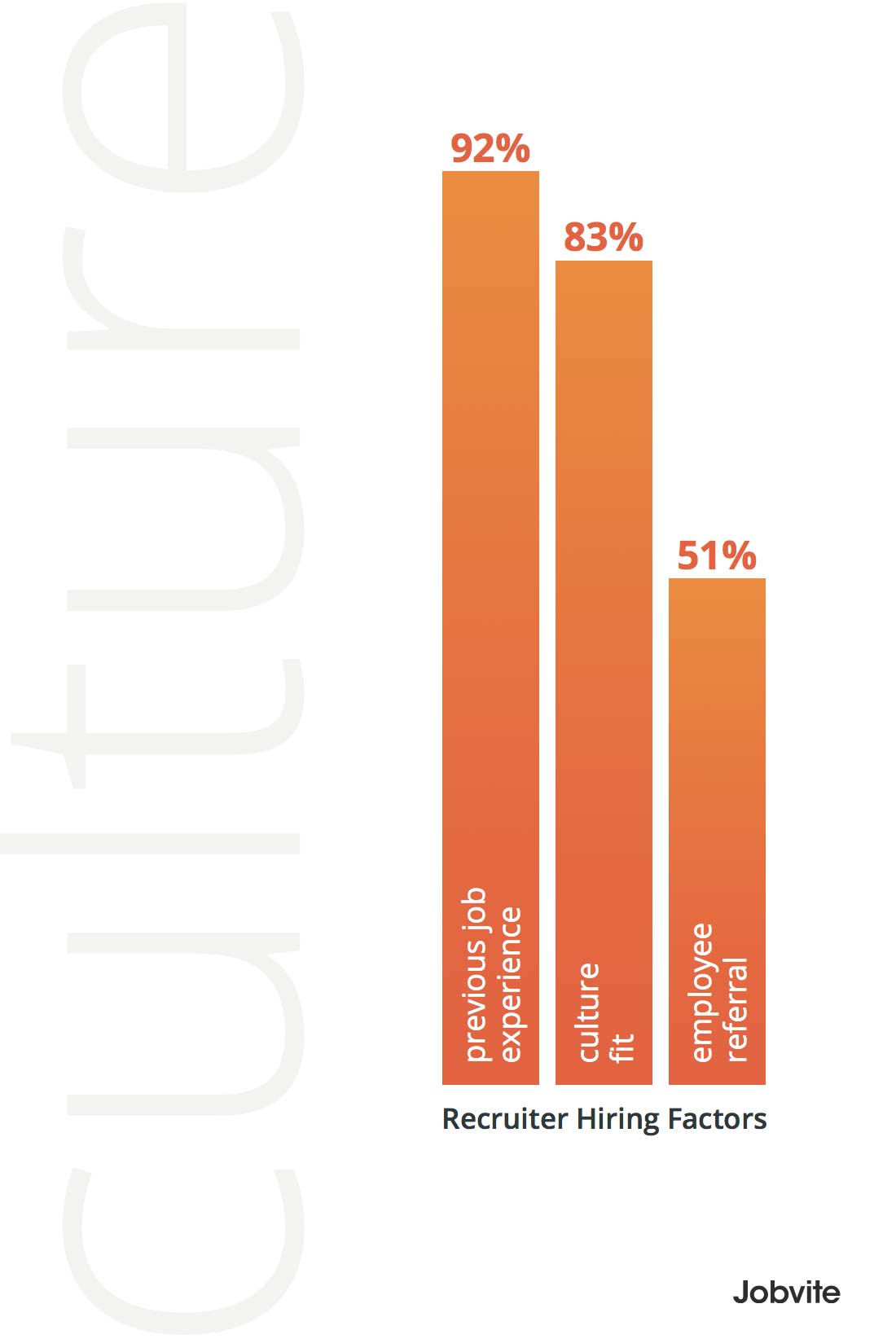 So What Makes a Good Candidate? One Word

Culture is important on both sides of the hiring equation.

We know it’s important to job seekers: 13% of job seekers have turned down job offers because of company culture.

But for recruiters too, the most important hiring factors are: previous job experience (92%) first, followed by culture fit (83%) and then employee referral (51%). 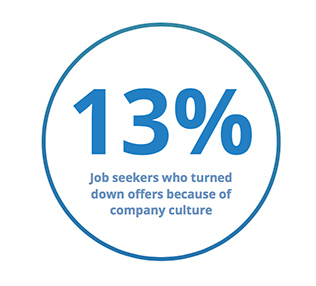 Subjective Traits Can Make or Break a Hire

Conversation skills and presentation matter most to recruiters.

The Positives: Conversational skills are by far the most important factors (92%) determining whether a candidate is a ‘cultural fit’.

But enthusiasm and appearance / personal style — both judgment calls — aren’t far behind.

Which of the following positively impact your decision to hire a candidate during an initial in-person interview? 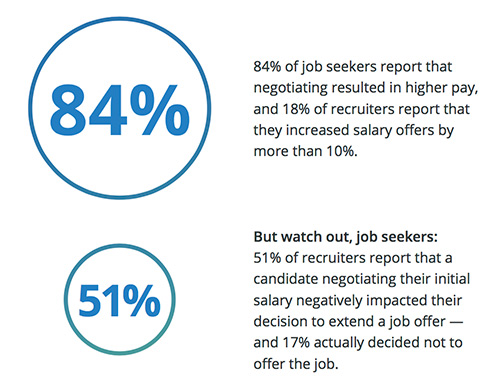 Getting a Candidate in the Door

Once the perfect hire is found, there’s no guarantee they’ll say yes. Here’s how recruiters are increasing their success rate.

Offering Money to Win Over Candidates

We know money trumps all — giving more of it can bring in top talent: 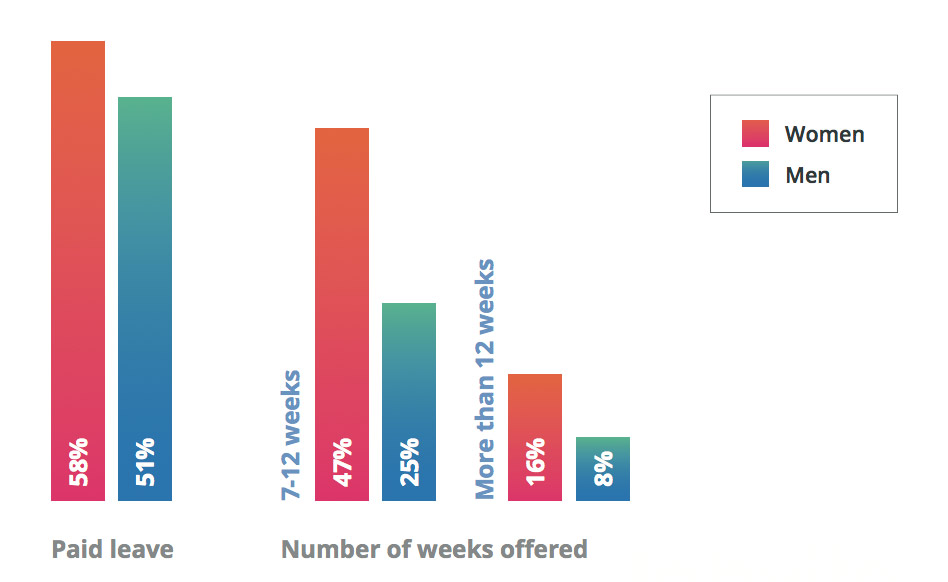 Parental Leave Should Be a Standard

But men and women are not treated equally when it comes to time off:

Perks + Benefits Attract Talent — But What’s the Hype About?

The benefits recruiters rank as most effective in attracting new candidates over the past 12 months:

The benefits recruiters rank as most overhyped in the past 12 months: 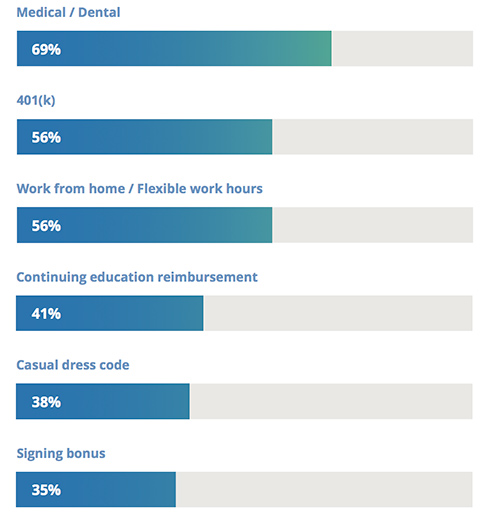 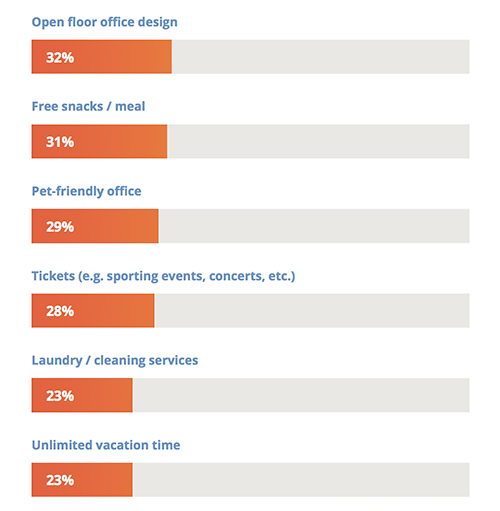 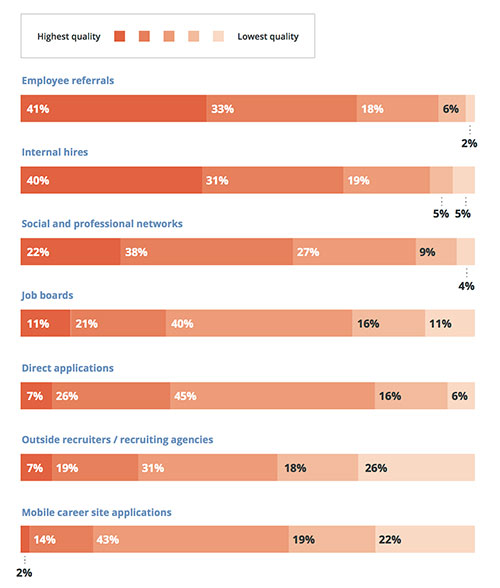 The Best Talent Comes From Within

Referrals remain the top source for quality talent, followed by internal hires and social/professional networks — but could this be another form of bias?

The worst sources? Outside recruiters / agencies and internet job boards.

And don’t forget about runners up:

A vast majority (88%) of surveyed recruiters had, at some point, gone back and hired a ‘silver medalist’ – a person who was previously passed over for hire. 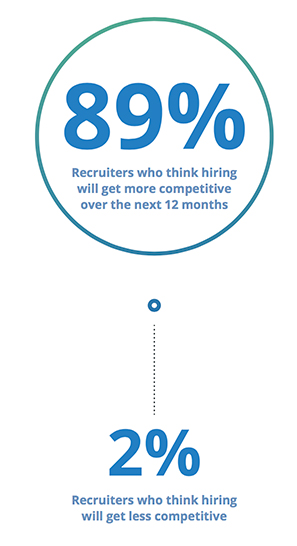 But Can Recruiters Afford to Be Picky?

Why are recruiters so scrutinous? A good candidate can be hard to find.

However, this is a decrease from past years. In 2015 and 2016, 95% of recruiters said hiring would be as or more competitive in the coming year.

Offices will stay full for now:

What Makes a Recruiter Successful?

When it comes to evaluating progress, recruiters rely on a mix of traditional and new metrics.

What is the most valuable metric you use to track recruiting success? 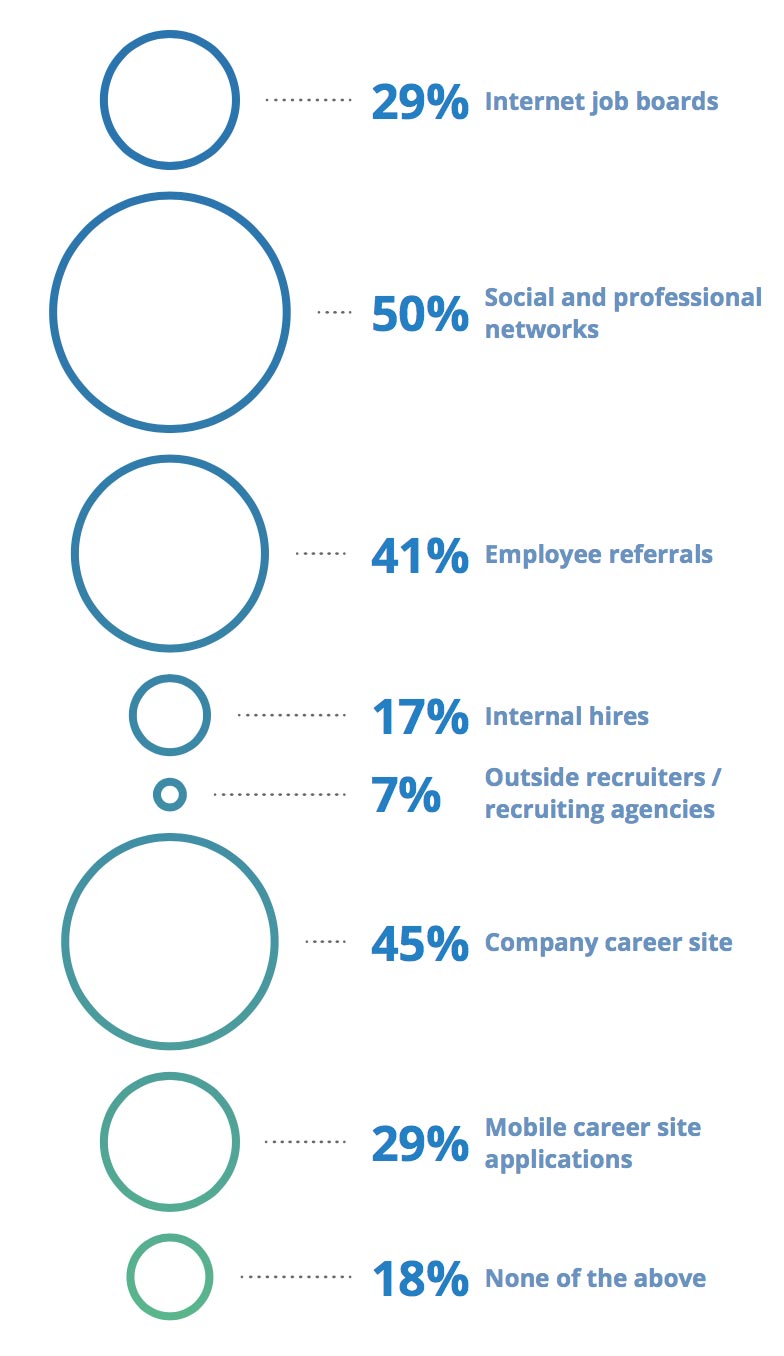 A Day in the Life of the Modern Recruiter

From 9-5 (and sometimes far beyond), recruiters are hard at work. Here’s how they spend their days.

How they spend their time (outside of active recruiting):

Where they invest their money:

Compared to the previous year, in the next 12 months, do you or your company plan to increase investment in any of these recruiting activities?

At the End of the Day, Recruiters Set the Tone

Today more than ever, recruiters are expected to be culture builders at their companies. They are the backbone of a successful, solid employer brand and the builders of a united culture. Thankfully, they know their worth.

An overwhelming majority of recruiters (80%) feel appreciated for their contributions to the company; this includes 37% who feel very appreciated.

On behalf of Jobvite, Zogby Analytics conducted an online survey of 831 recruiters in the US. Jobvite supplied Zogby Analytics a list of contacts. Each invitation was password coded and secure so that one respondent could only access the survey one time.

Based on a confidence interval of 95%, the margin of error for 831 is +/- 3.4 percentage points. This means that all other things being equal, if the identical survey were repeated, its confidence intervals would contain the true value of parameters 95 times out of 100.

Subsets of the data have a larger margin of error than the whole data set. As a rule we do not rely on the validity of very small subsets of the data especially sets smaller than 50-75 respondents. At that subset we can make estimations based on the data, but in these cases the data is more qualitative than quantitative.

Additional factors can create error, such as question wording and question order.