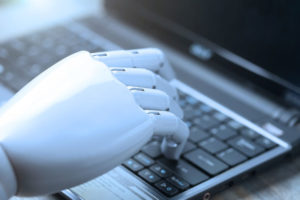 Over the last decade or so, one major pattern has emerged across businesses and workforces in America: every company is a tech company.

I’ve been saying this phrase for a few years now (much to the chagrin of my employees), and wholeheartedly believe it: if you’re a business that’s not tapped into technology to help serve your customers or build your products, you will cease to exist in the coming years. Plain and simple.

While this will continue to be true for years to come, I might have to change my tune. Because a new, potentially even bigger change is coming for companies, tech and otherwise. Now, every company will have to be an artificial intelligence company if they want to survive. Think about it — if you as a business leader aren’t prepared to move with the artificial intelligence wave, you and your employees might have their jobs automated before they can react. And that’s the real fear, right?

Allow me to explain.

We’ve entered a historic new economic paradigm, one we haven’t seen since the likes of the Industrial Revolution or the advent of the internet. AI (the ability for machines to perceive external factors and react to them to maximize success) is already getting plenty of play in the media, popular culture, and our government.

But it might come as a surprise that it’s also already changing the nature of some jobs today. When it comes to work that doesn’t require a formal education, programmable robots and algorithms can automate routine jobs: they can pick one apple per second in an orchard; they can stitch military combat pants quicker than human hands; and they can drive cars and deliver packages. Elon Musk, CEO of Tesla and SpaceX, believes that 12-15 percent of the workforce will be unemployed in 20 years, thanks to automated cars.

It’s easy to remain safe on our high horses, though, and assume that our jobs will never be automated. After all, we received college educations, we’re strategic, we work together — surely a robot can’t do that. But robots now outperform human surgeons in low-risk, outpatient surgeries; they’re teaching English to students in Japan and Korea; and RAVN is automating document review faster and more accurately than any human’s capacity. Sounds like we have a lot to worry about, right?

Actually, as history has taught us time and time again, the advent of new technology and the introduction of more efficient processes to workplaces has actually created more jobs than it has destroyed. The power loom created more weaver jobs than were ever around before clothing became a high-volume production, and when the car replaced the buggy, an explosion of new occupations resulted (road pavers, suburban construction, hotels, restaurants, construction, and more).

Instead, we’ll see many jobs become more efficient, with mundane, routine processes eliminated and strategic work left to humans. You could look at it this way: the future isn’t so much being replaced by robots as it is learning to work with (and train) them. But don’t forget that creativity cannot be coded — the hardest skills to hire for already are creativity and leadership, according to PWC.

This goes especially for recruiters. You’re the ones who can sell candidates on a workplace, plan for new departments, or make critical hires. While AI will help recruiters be more productive and make better decisions, recruiters are still the ones signing on the dotted line. That’s a power that won’t be taken away in the near future, especially by a robot.

As machines and algorithms help us become more streamlined and make smarter choices, the human side of our jobs will be left to us. We’ll use our intuitions, our experiences, and our team members to build the companies of the future. I hope the robots are ready for us.

How Important is Recruiting in Healthcare? Prepping For The Big Interview, Recruiter Edition