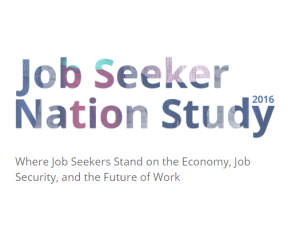 We’re excited to debut the 2016 Job Seeker Nation report, Jobvite’s annual study that is chock full of insights about the behaviors, views, and anxieties of the modern American workforce. Now in its seventh year, this year’s report finds the state of work in flux as today’s job seekers adjust to a new reality where job tenure is shorter and the hunt for new opportunities is constant.

The Job Seeker Nation survey found that nearly three-quarters of workers are open to new employment. This highlights a new trend where job hunting has become the de facto state for many. The younger generation of workers sees career change as constant. There’s no such thing as a job for life anymore, and nearly half of millennials expect to change jobs every one to three years.

And no surprise that technology continues to change how we find work and has even altered the very nature of a job. Case in point: the on-demand “gig economy” is booming. Nearly one-fifth of workers report that they’ve held a gig-type job with companies like Uber and Airbnb. And many workers voiced concerns that technology to automate their jobs may make them obsolete in the coming years.

Technology is key for those in the job hunt. Nearly half of workers reported using social media to search for a job, and in particular uncover clues about the company culture of a prospective employer. And job seekers are increasingly mobile, searching for jobs anywhere and anytime. Half of job seekers have searched for a new job while in bed, while 37% reportedly job search from their current workplace.

While “fun” perks like flexible work hours and in-office snacks are on the rise, the growth of serious benefits has been slower. Only 43% of respondents reported having medical coverage through their job and a mere 33% have a 401(K) plan through their company.

Clearly the Job Seeker Nation report shows that way we look for work, and the way we work, is changing significantly and the modern job seeker must be more flexible than ever in order to succeed.

To read more about the state of work and what your fellow workers think the future may hold, download the 2016 Job Seeker Nation report today.