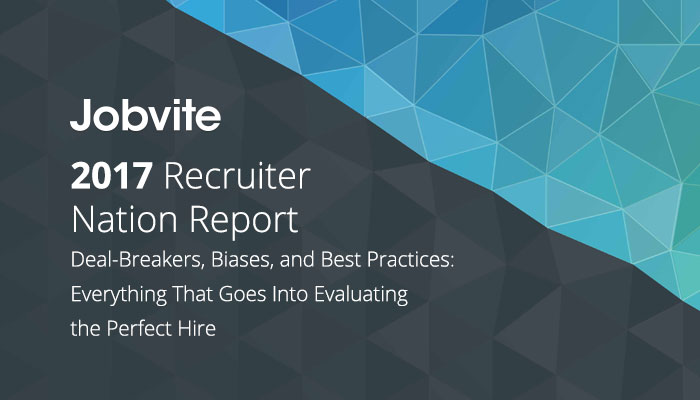 We’ve said it before and we’ll say it again: people are the lifeblood of any company, big or small. Without talented, dedicated employees, any business ceases to function as it needs to.

For recruiters, that means the stakes are high. Bringing in talent — quality, enthusiastic, skilled, great talent, no less — has never been more difficult. It’s a job seeker’s market, as you know, meaning that recruiters are at the whim of what their candidates decide. As renowned author Flannery O’Connor once said, “A good man [or, in this case, employee] is hard to find.”

At the end of the day, though, “good” talent is simply a reflection of a recruiter’s judgment — whether they believe this person will be able to get the job done, get along with the rest of the company, and grow alongside it. So what goes into that judgment? A whole lot, from biases implicit and explicit to hands-down deal-breakers to key traits that have proven to make a solid employee.

It’s the why behind these little judgments that can tell us about recruiting today — what matters, what doesn’t, what’s ethical, and what candidates can do from here.

In our 2017 Recruiter Nation Report, we delve into these attitudes, behaviors, fears, strategies, and predictions for how to build the best companies possible. We learned that, although the public discourse might say something different, bias in hiring does still exist. We learned that recruiters use their own personal judgments to do what they believe is best for their company — and sometimes, that’s a good thing. We learned how much recruiters see, hear, and absorb on a daily basis, making them some of the most perceptive people in an organization.

And after surveying over 800 recruiters in all corners of the United States, we learned some major lessons about the importance of the recruiting function — the weight it carries and why recruiters can be a barometer of a company’s cultural health. Some key learnings we discovered include:

A majority of recruiters (57%) believe implicit bias is a real problem within the American workforce. However, most recruiters say they have no goals in place to increase diversity:

Some recruiters even see biased attitudes in action:

Creating a positive culture starts with knowing what you value — all the way from the interview.

Who we are impacts how we hire:

When it comes to evaluating talent, men are more visual — while women more often judge on credentials:

« The Top 3 Recruiting Metrics to Measure Embracing AI in Recruiting »