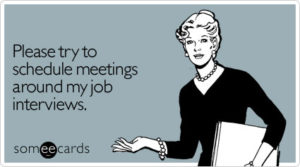 The job market is not an easy arena to navigate for neither job seekers nor employers. Connections and job referrals aside, it almost always comes down to what is on paper. For a candidate, depending on where you came from and where you are trying to go, that could be a very suboptimal situation. You know you are capable; you simply may not have the proof they are looking for – on paper.

I have spent quite a bit of time both actively and passively searching for jobs. In my experience, I get the most strides if I can survive the paper process. Essentially, how does my resume and cover letter match up to the role – according to the queries of their recruiting software? If my resume has enough of the right keywords, I might have a shot.

Despite having transferable skillsets and the right foundation for a particular role, most employers are afraid to take risks on candidates without the backgrounds or experience they’re looking for because the costs are potentially very high. Any time spent on a candidate is money. Naturally, employers have to be calculated.

I spent some time working in various jobs before finally landing my intended role in account management. I love working with people but I also needed to be challenged; account management made sense for my next step. It was a big step because I wanted the role but did not have the conventional background for it…

Previously, I was gallivanting the world as a flight attendant with one of the best airlines on planet earth – and space. My smartphone was my home and best friend in the midst of changing airports, hotels, and faces, so technology was never foreign to me.

Fast forward to Seoul, Korea, where I set up a live video-chat interview with a recruiter for a position at one of the most colorful tech conglomerates in the valley. The time zone situation was beginning to complicate the relationship so after many email exchanges, the recruiter and I settled for a phone call upon my return to the States. The situation left me feeling uneasy that I was an anomaly in their recruiting process but long story short – and weeks later – I got the job.

I spent the next year diving into emerging products, software, piloting ideas and occasionally secret buildings. Though it was not an account management role, it fostered other skillsets that I would need, making the long shot to account management in technology a smidge shorter.

Serendipity (ser-en-dip-i-ty) – noun: the faculty or phenomenon of finding valuable or agreeable things not sought for [Merriam Webster]

One morning in a quaint San Francisco cafe, I was passively searching for jobs. I saw a role that caught my eye: “Customer Success Account Manager.” I read the job responsibilities, most of which required excellent communication and people skills, which I knew I could deliver. I genuinely love people so much that these aspects would not even be work for me. Then I looked at their required minimum experience and my excitement deflated. They wanted experience in backgrounds I did not have, at least not on paper. Well, shoot.

Upon reviewing my cover letter and resume, my hiring manager saw potential in my candidacy but naturally had her hesitations. I had the foundation for the role and clearly I can write a cover letter well enough for her consideration but – I did not have any of the traditional backgrounds requested for the role. In fact, my curriculum vitae appeared overall very unconventional. Out of sheer curiosity she invited me to a video interview (extremely low costs to her). She sent a series of questions she wanted to ask me and I did the recordings on my own time. She tells this story better but essentially, I got the job! Feels like a speed date that actually went well.

True story. As one of my favorite quotes from the movie Rounders go, “You can’t lose what you don’t put in – but you don’t gain much either.”

Take chances. Be smart. With Jobvite Video, you won’t have to wonder, “Who am I missing out on?”