The 2021 Recruiter Nation Report is Here! 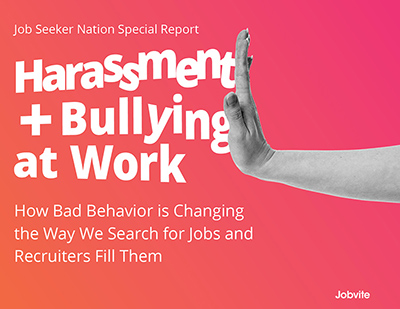 But a toxic environment can threaten to send employees straight out the door.

Over the last year, two important aspects of workplace culture have been placed under the magnifying glass: sexual harassment and bullying. Movements like #MeToo and #TimesUp make it clear that employees will no longer tolerate bad behavior in the workplace. Workers across industries are speaking out against inappropriate and abusive treatment in the workplace, and this call for reform is impacting the way employers build culture and employees evaluate companies.

After nearly a decade of polling job seekers across the country about how and why they look for work, we wanted to dig deeper into how much this inappropriate behavior influences the way people evaluate companies and select employers — and the overall impact it has on the recruiting industry.

In our first ever Harassment and Bullying Report, Jobvite partnered with Zogby Analytics to survey over 1,500 jobseekers about sexual harassment and bullying at work. The study examines frequency, reporting, retaliation — and also how these behaviors impact a person’s decision to apply for a company or leave their current one. We learned that job seekers won’t tolerate bad behavior, and it’s even enough to drive current employees away. The data provides important information about what truly matters for employees today — and how companies must adjust to build safe, secure, and engaging workplaces.

Some key findings include:

To learn more about how bad behavior in the workplace impacts the employee and candidate experience, download this special report.