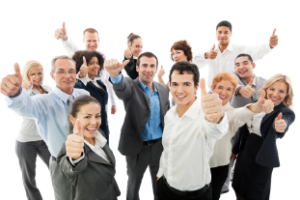 This question has been asked a lot at the companies in and around Silicon Valley. The real question is: “We have this open position, do you know someone that you’ve worked with; would you like to work with them again?”

I have a pretty good network for this in Los Angeles, and probably could find someone easier than in Silicon Valley. But when you change metropolitan areas, your network changes. The employee referrals I’ve given Jobvite have completely different skill sets than those in my Los Angeles network but still provide as much value to the company.

Some of the tips in this article can be implemented easily with Jobvite; however, an employee referral program is more than just software. It’s about developing a company culture that builds on itself.

What’s the elevator pitch of your company? Can you describe what your culture is in twenty words or less?

One reason why employee referrals work so well is that people congregate in tribes. Like-minded people that enjoy their company both in and outside of the office will be more productive and eventually create great products. And great products result in great companies – just ask Apple.

If you have a clear definition of what your company culture is, your employees will know who to go after. For example, if you are trying to building a startup environment that includes foosball tables, it’s probably a good idea to attract a younger demographic. Great cultures attract great people, and that builds on itself. But it has to be well defined so employees know what that culture is.

So what’s your culture?

Encourage Employees to Look at Their Entire Social Graph

There’s a good chance you’ll never work with your best friends but will find great employment opportunities with acquaintances. I’ll give you an example of what I mean.

My friend Brian listens to Bruce Springsteen. As much as I like “Born in the USA,” I hate Brian’s music tastes. When I want to talk about music, I seek people that listen to music I like. And music I like is definitely not Bruce (my apologies to The Boss). The same goes for people you work with.

Your friends probably don’t have the same job you do, or have the exact same job and might be in competition. You also have fewer close friends, but have many loose connections that have similar interests and careers.

Dunbar’s number is another theory that indicates people have an upper limit of friends they can keep close relationships with (around 150). Remember, this data was collected before social media. Facebook confirms the numbers in that most people have average 130 friends.

According to Jobvite’s Social Recruiting Survey, 82 percent of job seekers are on social networks. You and other employees are probably “friends” with a lot of them. With the tools we have today, it’s easy to stay connected to weaker ties to find quality hires and referrals. Encourage your employees to refer them.

Encourage your employees to send personalized emails or messages detailing why that person would be a fit for your great company. I would encourage these one-on-one conversations, because they result in more engaged candidates. Think of it as advertising; the more personalized the message, the better it converts. There’s a 50/50 chance they’ll act on the message but much less than that (one percent chance) if it’s in the feed. Publishing to the feed achieves greater reach and increases brand awareness, but has a lower chance of action.

If they aren’t a fit, you have to take special care in talking to them, because there are many, many reasons why people don’t fit in companies, and none have to do with their qualifications. Also, if they aren’t a fit now, they may be at a later date. So be nice.

Reward Employees Appropriately (And Not Just with Money)

If you’re paying $100 for an employee referral and a handshake, you’re doing it the wrong way.

I’ve referred a lot of people to recruiters, and I’ve always refused the bonus.

What I really want is social capital: knowledge that this deed will be rewarded sometime in the future. Maybe the recruiter will remember, and get me a better rate. Or maybe the person I referred will do an awesome job, and because of his contribution, the whole company may recognize me.

If you offer a bonus to referrers, give more than just money. People like to know that their companies value them. Small tokens of recognition will go a long way. They will be happier and more willing to refer.

It’s no surprise that referrals are the best source of outside talent, fit best in the company culture and are less expensive to recruit. With referral strategy centered on social networks and weak ties, your company can both reduce recruiting costs and have an influx of quality candidates in the pipeline, having an easier answer to that “Know anyone looking for work” question.