–Millions of Americans are currently unemployed, but they’re not alone in the hunt for work. They are joined by employed people actively looking to switch jobs, college graduates entering the work force – and a large group of employed Americans who are open to a new job. These groups form a nation of job seekers. 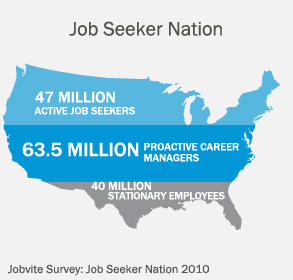 We commissioned a new survey to find out who these job seekers are and how they look for work now. Today we released the survey results – and they are enlightening both for working Americans who want to better their employment chances and for employers who need to find and attract talent.

This national survey of 2,180 American adults found two-thirds of currently employed Americans are either actively seeking a job or open to a new opportunity  – joining the millions of unemployed in the job market.

This report profiles three categories of workers in the United States:

The Jobvite Survey: Job Seeker Nation 2010 uncovered the characteristics of a segment comprising 53% of all working Americans: Proactive Career Managers, who are not actively seeking a job, but continuously cultivating relationships and resources to increase their career opportunities.

“A large group of job seekers believe they have a better chance to land a job if they are connected, proactive and prepared – and rightly so.”

Though Proactive Career Managers make up most of America’s workforce, not much has been known about their collective characteristics until now. In the past, job seekers have been categorized as “active” or “passive,” but this new segment is far from passive about building professional networks to surface new career opportunities.  In fact, the level of job search activity among this group is closer to the profile of active job seeker than a passive one.

We worked with the polling company™, inc./WomanTrend who conducted this nationwide online omnibus survey of 2,180 adults on our behalf. The demographics of this audience closely match the nationwide population of adults (age 18+) with respect to gender, age, and region, and race and ethnicity. Fielded October 19-21, the survey included questions on current employment status and resources used to find job opportunities.

« Metrics that Matter: Our New Technology for Recruiting Intelligence Social Recruiting: An Industry Leader Grows by Word of Mouth »